Celebrity Endorsements: Are brands moving away from celebrities to sell their products?

People wanted to drink tea from the same tea-set as the Queen. The oldest record of a ‘celebrity-endorsement’ for a brand dates back to 1760 when Josiah Wedgwood, founder of pottery and Chinaware company created a tea-set for Queen Charlotte. He then sold the same to the masses. Never having associated a celebrity to a product before, there was a huge demand for this particular crockery set.

In recent decades, the widespread availability of radio, television and the internet has lead to an increase in this brand-wide celebrity endorsement. From Sachin Tendulkar in Reynolds, Selena Gomez in Puma to Amitabh Bachan with Cadbury, consumers tend to associate the brands and products to the celebrities endorsing them.


This association implies that to a certain extent marketeers have been successful in trying to increase brand awareness. There are several reasons which have been presented to explain the use of a celebrity; from royalty to sportspeople, pop-culture icons, actors, and even locally famous individuals to promote products. At its core, the idea is that celebrities are admired by consumers and that consumers wish to imitate their favourite celebrities mannerisms, choices, and lifestyle. For this imitation to be successful; people will often buy products or services that have been recommended by their idols. 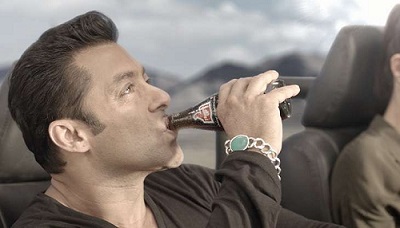 In truth, however, the relationship between brands and celebrities is not that simple. There are several factors which define and affect this partnership. The financial aspect, for example, is not a simple transaction where the company signs off a cheque and shoots an ad. The annual marketing budget has to take into account the expenditure and see if returns are worth the investment. In 2016, Coca-Cola dropped Salman Khan as their brand ambassador for their drink ‘ThumsUp.’ The brand and Salman Khan in a joint statement claimed it was a mutual decision, while another source claimed it was due to the company wanting to maintain a ‘young’ image, and therefore looking at Ranveer Singh to replace Salman Khan.

At the time, however, people didn’t completely accept this as there were various other aspects which seemed to influence the decision.

Just prior to parting ways, Salman Khan had made statements in bad colour about Pakistani artists in India, and at the time, was known to charge 5 crores to every brand he endorsed. These factors combined with more added up in the reasons surrounding the termination of Salman Khan’s contract with Coca-Cola.

Going beyond just the financial aspect affecting the relationship between celebrity and brand is also the profile of the celebrity. The profile of a celebrity takes into account not only the popularity but their opinions and how they act in the public eye as well. There are several examples which have shown brands how consumers react to their product if the brand ambassador ends up in the midst of a controversy.

In 2014, Aamir Khan made certain comments about his fear of growing intolerance in the country. As a response to his personal political views, people started to boycott Snapdeal and gave the app negative reviews.

Today Social media has changed the concept of celebrity endorsements. With the popularity of social media, celebrities have become more accessible to people. They are no longer limited to our televisions and cinemas, they are everywhere and more importantly, they are on our phones on a regular basis. This ‘omnipresence’ of celebrities has taken away from the awe-struck aspect of celebrities. Today consumers know that if Kim Kardashian is tweeting about a lip-balm, she is being paid at least $20,000 for 140 characters. So while they will take into account the existence of a particular product, they will be more interested in its quality. Now gaining consumer trust and loyalty is not just based on the popularity of the person used to talk about the product, but also the quality of the product.

It wouldn’t be fair to say that brands are not aware of the importance of social media, because there are many examples of various campaigns that brands have undertaken to increase their reach. Coca-cola’s recent campaign where they wanted the consumer to ‘share a coke with x’ had cans and bottles with various titles such as ‘bae’, ‘boss’, ‘friend’, ‘grandma’, mentor, etc. This campaign was successful and had people sharing images of their coca-cola beverage all over social media. An interesting point to note is that this entire campaign was successful without the endorsement of any celebrities. In fact, this isn’t the only example where a brand has successfully managed to increase their reach without celebrities. In 2014, the Starbucks White Cup Campaign - was a social marketing experiment in which consumers were called to create their own design on the ‘Starbucks cup’, the winning design would be taken by Starbucks and recreated for a limited number of cups.

“In 2018, OnePlus became the top premium phone brand in India, beating both Samsung and Apple for the lead. OnePlus’s initial campaigns (2016-17) were entirely done on social media using Influencer endorsements as a way to market their product.”

Increase in social media presence has also prompted a shift in brands moving away from celebrities towards influencers. In 2018, OnePlus became the top premium phone brand in India, beating both Samsung and Apple for the lead. OnePlus’ initial campaigns (2016-17) were entirely done on social media using Influencer endorsements as a way to market their product. By providing influencers with their premium products to review, OnePlus managed to reach an extremely large and attentive audience.

Influencer marketing is emerging as an important feature in the advertising industry, taking away from the now done and dusted celebrity endorsements. But is it possible to assume that influencers will become as obsolete as celebrities are on their way to becoming? With a prominent social media presence and innovative, successful campaigns, brands don’t need famous faces to constantly promote their products. The question we ask now is - do brands really need to associate with a celebrity of any kind to sell their product? Or is the presence of the brand alone, along with quality products, online interaction with consumers and good social media presence enough?

We’re a consumer insights agency. The interface of digital innovation and human psychology lies at the centre of our process; it helps us bridge the gap between brands and people>